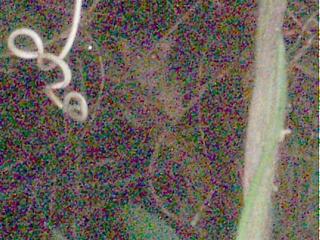 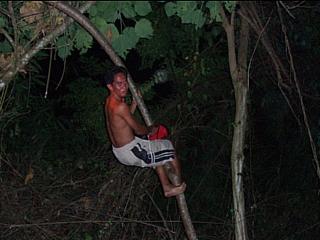 Did you know we can also find some "Tarsius" the famous smallest monkey in the world just behind the Cha Cha cottage?? We did'nt know untill today.

We heard from our staff say there are some Tarsius living behind our dinning area before, but to be honest, we could not believe because we always thoust Tarsius is not exist on this island area anymore. We believed only place we can see them is a Tankoko National Park.

But today we saw them. Three of them. Fian(our staff) called us, and said "There are Tarsius, and many of them!", so we went up and had look just 10m way up behind dinning area. Then We saw them and heard their voice, too which we heard this voice many many times before. We thought this voice was one of those "Paniki(Bat)" voice, again we were wrong. This amazing loud voice compare to their finger size small body were came from these Tarcius Monkey.

Raf could not take best shot, but you can see at least their red eyes in this photo, and don't forget our big Tarcius guy call "Fian" try to make friend with them, I hope he will success someday.....
Posted by Cha Cha Fish at Tuesday, October 25, 2005 1 comment: 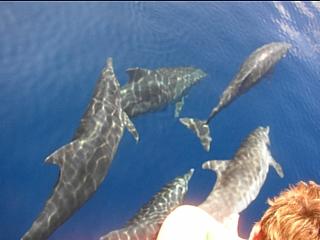 In front of Cha Cha Dive Lodge located east side of Bunaken, we can ofthen enjoy dolphine wathcing. Almost everyday they appered somewhere in the reaf if the sea is in good dondition.
Today's dolphines were extreamly friendly. They came to our boat and wanted to play even after we stopped boat engine for a while.so I jamped in.
There were so many of them and chatting each other with very friendly voice under water, then I realised they changed their voice to some kind of clicking noise to warn their friends as soon as they noticed my existance in the water. but they did not go away so quickly and carefully some dolphines came close and had take a look on me. It's a fantastick feeling to see their curiousity face so close, but maybe they might thought same thing at same time about me......
Posted by Cha Cha Fish at Friday, October 14, 2005 No comments: 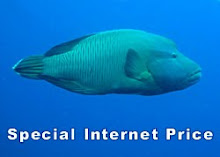